This feature is only available on our Enterprise plan. Contact us to get started today.

This guide outlines the one-time setup process for Self-hosted Live Updates and instructions on how to include them within your existing CI/CD pipeline.

Much of the self-hosted live update process is completed within your CI/CD infrastructure, with Appflow and a live update plugin managing the deployments of live updates.

Customers can choose to deploy the live update at a later time using the Appflow web UI. Within Appflow, the same capabilities of the classic live update solution are available, including viewing the complete list of live updates, the ability to set native versioning restrictions, and even rollback to previous live updates.

The following steps explain the one-time setup process required to configure your app.

Create an App in Appflow​

While much of these features are performed within your infrastructure, Appflow still needs to be aware of your app. You'll also manage live update deployments and channels from within the Appflow dashboard. On the Apps screen within Appflow, click the New button then choose "Import existing app." Enter your app's name, select Capacitor as the mobile architecture, then click "Connect git host later." You won't connect your app's code to Appflow at any point.

With the app created, note the APP ID that appears at the top of the screen, like "042a1261." You'll need it shortly.

Use of Self-hosted Live Updates requires using the Ionic Cloud CLI for signing, bundling, and uploading Live Update artifacts. It can also generate signing keys for you if you need it to. The Ionic Cloud CLI was purpose-built for use within CI/CD systems; it's small and easy to download. Please reference the one-line install instructions.

Code signing guarantees that the code your developers wrote is the code that is shipped and applied to user devices. Each Live Update web artifact is signed with your private key, then the Live Updates plugin uses the public key to verify integrity of the new update. It is only applied to the user's device if nothing has been modified.

The Ionic Cloud CLI includes a command for generating signing keys. This command generates a public and private key pair. The key files are written to the current working directory; these files can be named by passing additional arguments to the following command.

Make sure you also store the private key somewhere that is accessible from your CI/CD system. The private key will need to be passed to the Ionic Cloud CLI each time you upload a new Live Update artifact.

Within your Capacitor app project, install the Live Update plugin:

With the live update plugin installed, add a "LiveUpdates" configuration section under plugins in capacitor.config.ts (or capacitor.config.json) file. Set appId with the Appflow app id created above, channel to the live update channel that the plugin should listen to for new updates, autoUpdateMethod to "background" to have live updates download in the background and automatically apply the next time the user opens the app, and maxVersions to the maximum number of versions of the app to keep cached on device. The key is the path to the public key created above used to verify the signature of the Live Update artifact upon download. It is recommended to store the public key file at the root of the Capacitor project.

With the live updates plugin configuration details set (and anytime you change the configuration in the future), sync the project to ensure the iOS and Android native projects are updated:

Running the cap sync command will copy the public key into the Android project, but iOS requires a manual step to accomplish the same. Open Xcode (npx cap open ios) then open the project navigator. In the navigator window, right-click on "App" (the folder, not the top level App entry), then choose "Add files to App." Navigate to the public key and click Add. The public key will appear in the navigator, like so ("ionic_cloud_public.pem" in the screenshot): 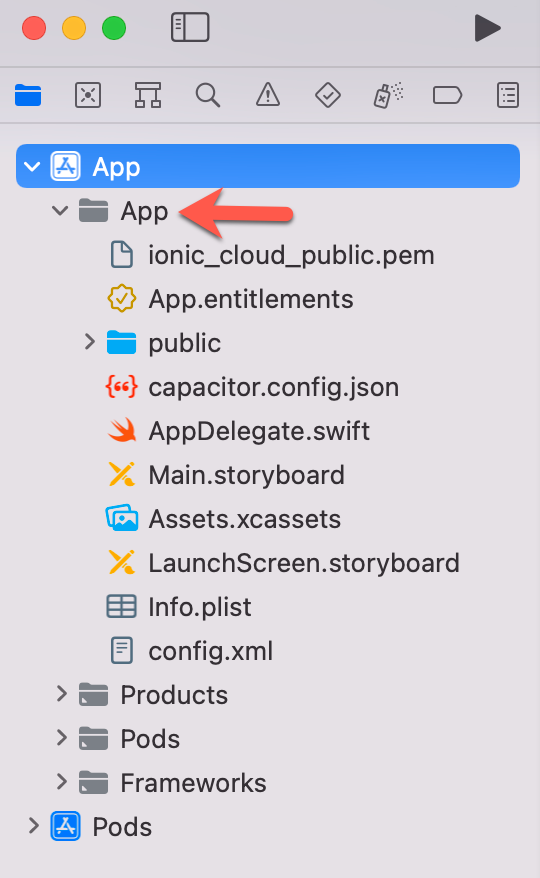 The following sections outline the additional steps to add to your CI/CD pipeline to publish a Self-hosted Live Update to your app.

Using your preferred CI/CD system, perform a build of your app's web resources.

Customers can choose to have live update web artifacts stored and hosted in Appflow ("Appflow-hosted") or their cloud storage solution of choice ("self-hosted").

If you choose to have Appflow host your live update web artifacts, your app's build directory will be signed, bundled, and uploaded to Appflow. The Ionic Cloud CLI does the heavy lifting here:

If you choose to host live update web artifacts in your infrastructure, your app's build directory will be signed, bundled, and uploaded to your storage mechanism of choice. Finally, you'll inform Appflow that a new live update is available.

Complete pipeline examples are available, such as Azure DevOps.

Now that the web app has been built, we can use the Cloud CLI bundle-artifact command to turn the web artifact into a live update.

In this last step, inform Appflow that a new live update is available with the Cloud CLI register-artifact command.

With a new live update now hosted in either Appflow or your storage provider of choice, it's ready to be deployed to your app users!

Upon completion, you'll find the new live update in your App's Builds list in Appflow. From there, you can follow the standard Live Update flow of assigning the build to a Live Update Channel.