Now that your app is ready, you need QA. Quality assurance involves testing and avoiding defects before release. In order to send an app out for user testing:

In this tutorial you will prepare a build for distribution, deploy to the destination, and invite testers for your app.

The Apple TestFlight service is used for sharing the early release of an app with users.

TestFlight makes it easy to invite users to test your apps and collect valuable feedback before you release them on the App Store. You can invite up to 10,000 testers using just their email address.

With TestFlight we can take an early build of an app and share it with a select group of users, allowing them to provide feedback on their experience. Since the app is compiled ahead of time, developers can test the full spectrum of native APIs and server requests and verify.

Preparing a build for distribution​

To use TestFlight you need an app build signed with a distribution signing certificate.

Creating a distribution certificate and corresponding provisioning profile is similar to creating a development certificate which we did in our previous chapter with few changes. 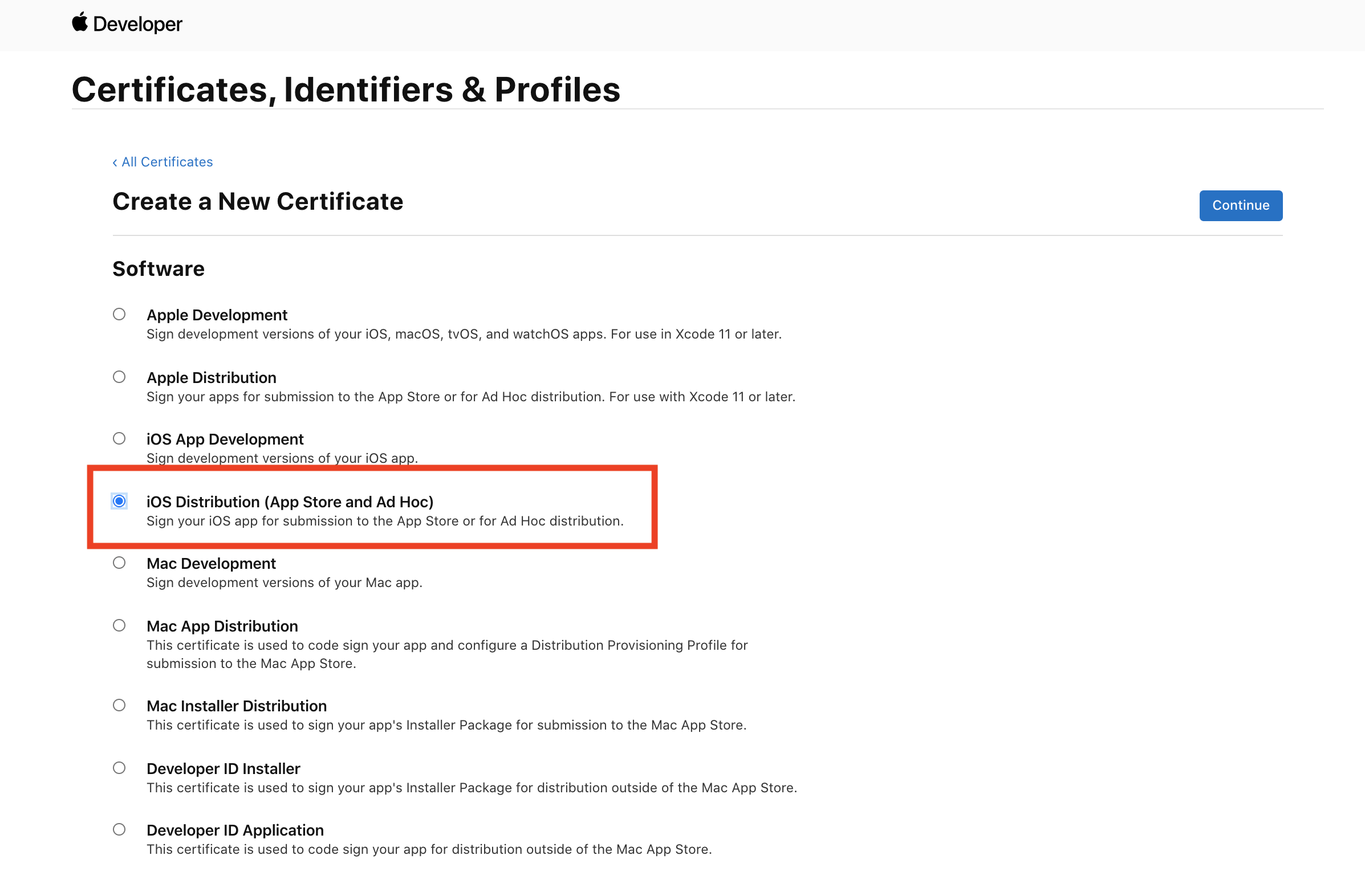 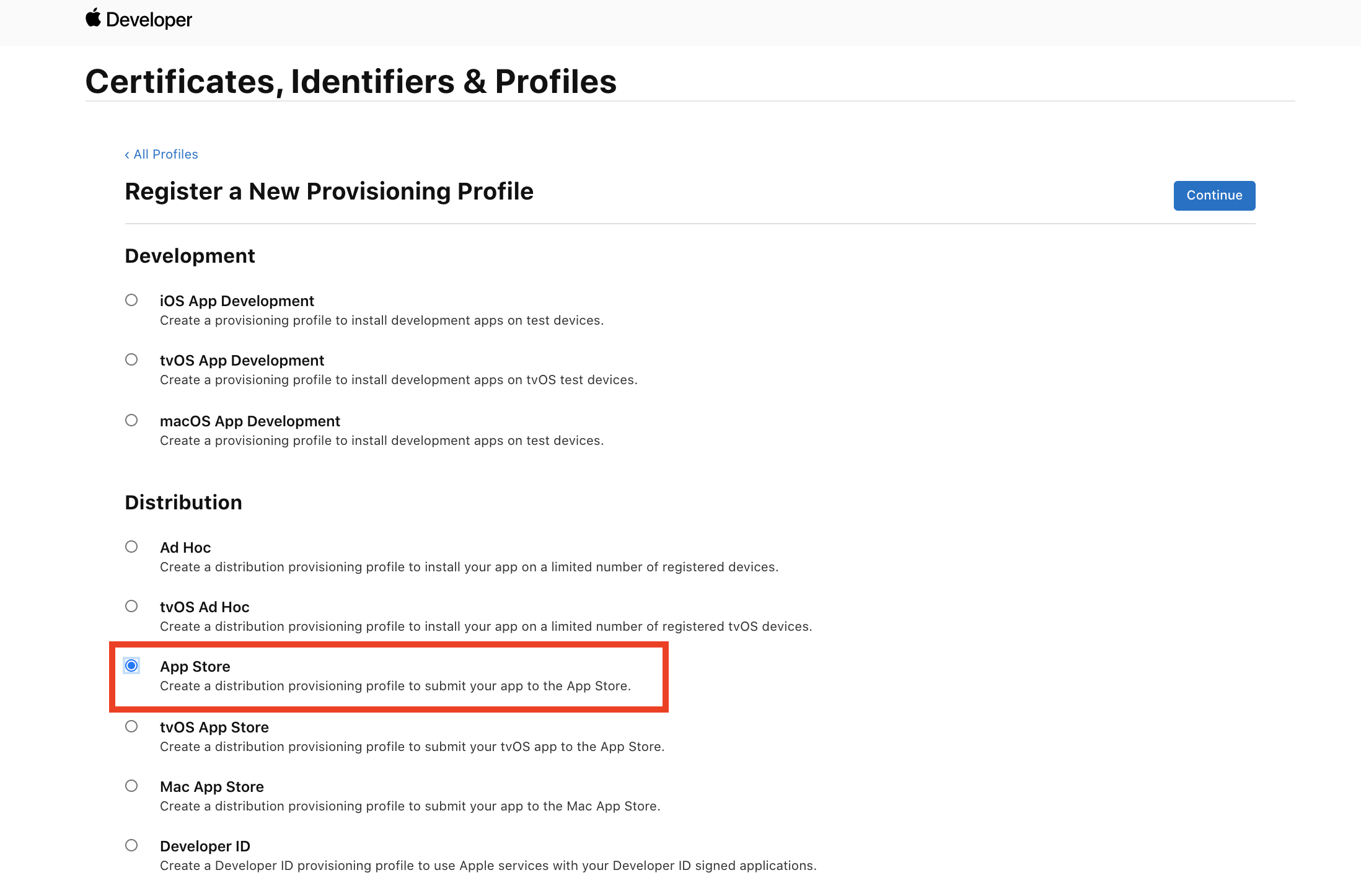 With this, you can now create a production signing certificate in Appflow Dashboard, similar to one we created in previous chapters, and select Signing Certificate Type as Production.

Deploy to the Apple App Store​

To be able to deploy your App build directly to the App Store or TestFlight from Appflow, you need to add the Apple App Store as a Destination in the Appflow Dashboard.

For this, you need to create a new app in App Store Connect and then follow the guide to set up Deploy to App Store

You are now ready to build a production iOS app on Appflow! Trigger a new iOS native build just like you did earlier and include the production signing certificate you just created. 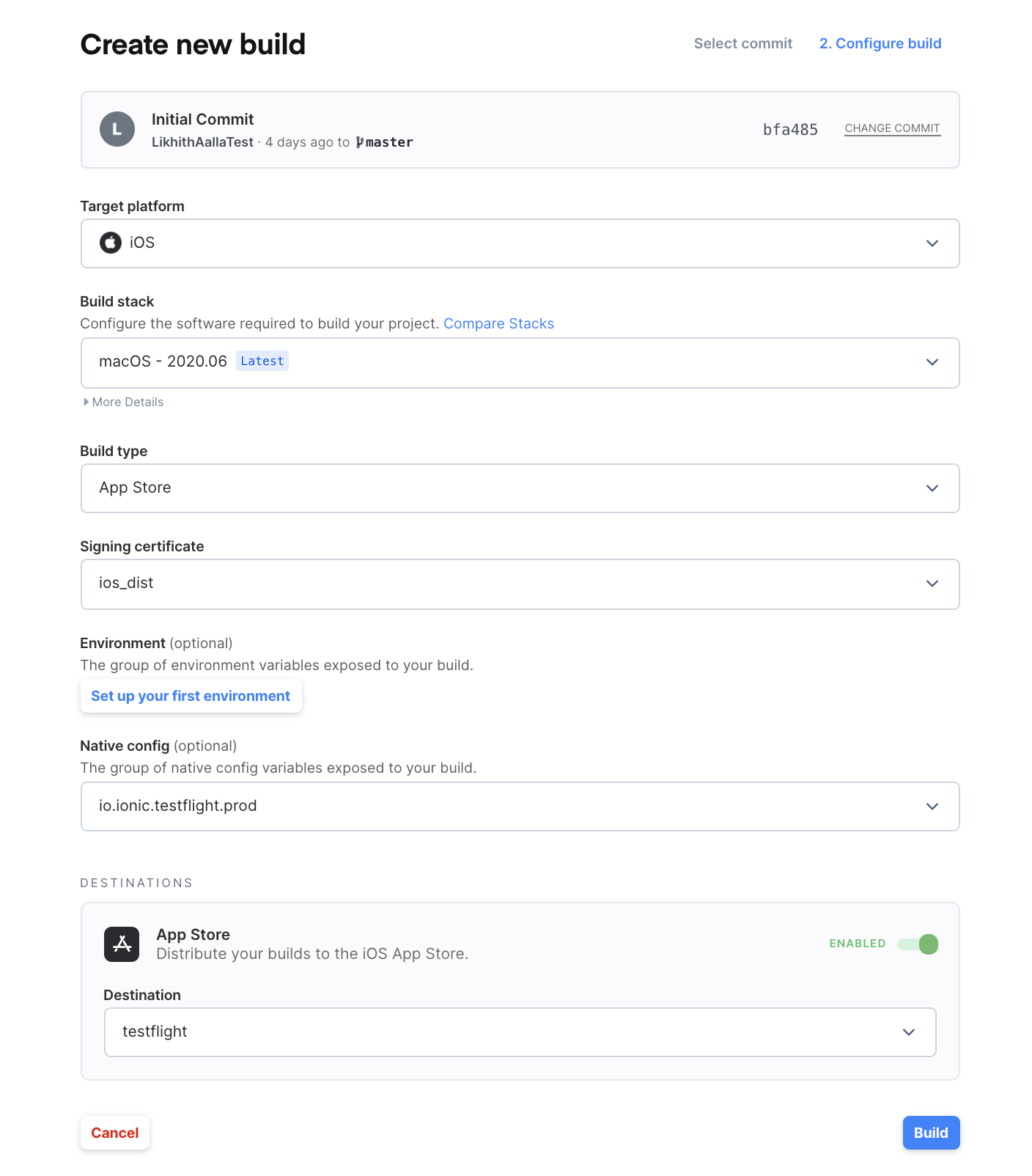 You can see the deployment logs in the Deploy>deployments tab. 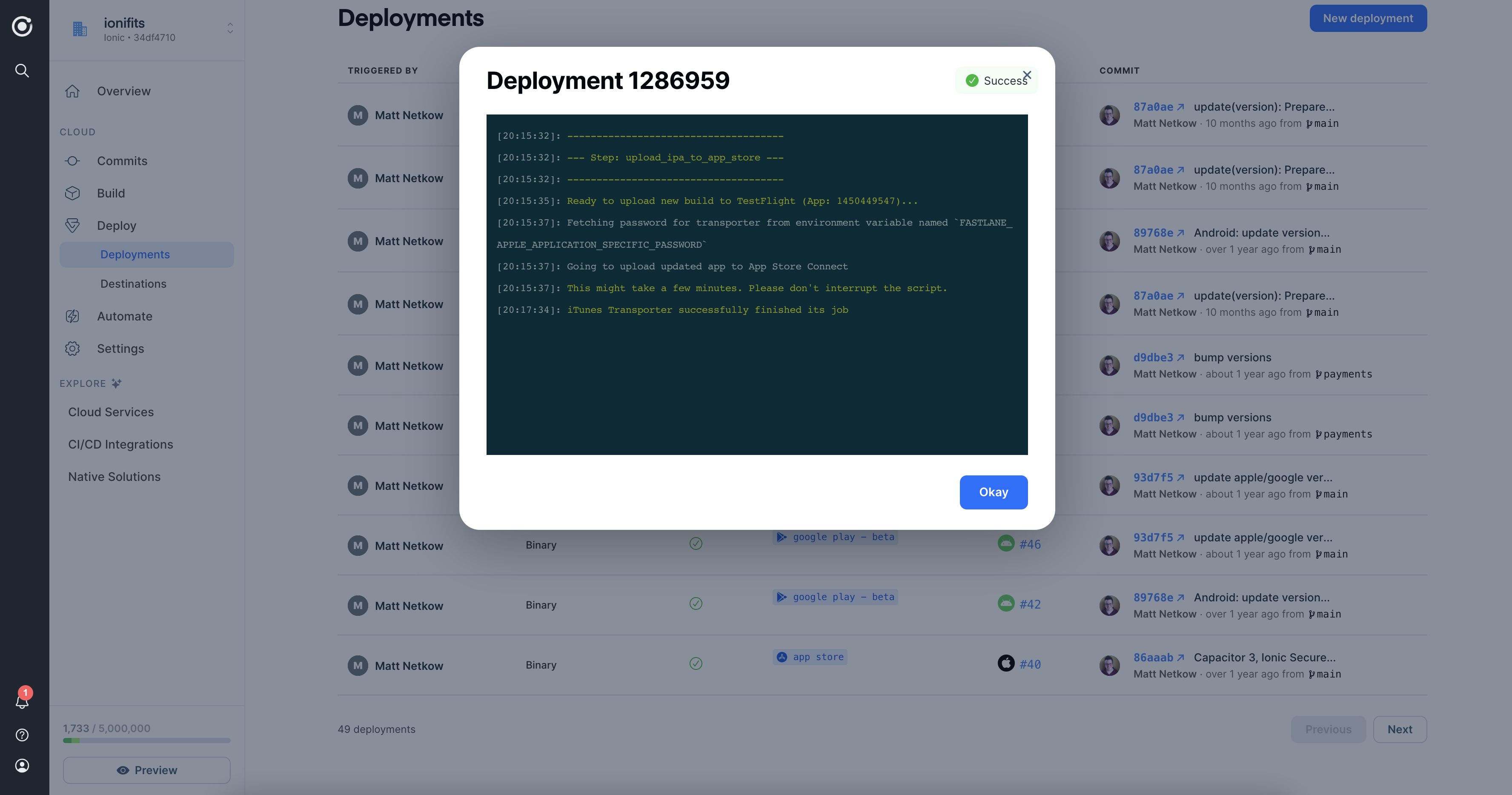 Once the deployment is successful in the Appflow Dashboard, you can see the same build show up in your App Store Connect account select your app > TestFlight tab in the top navigation. 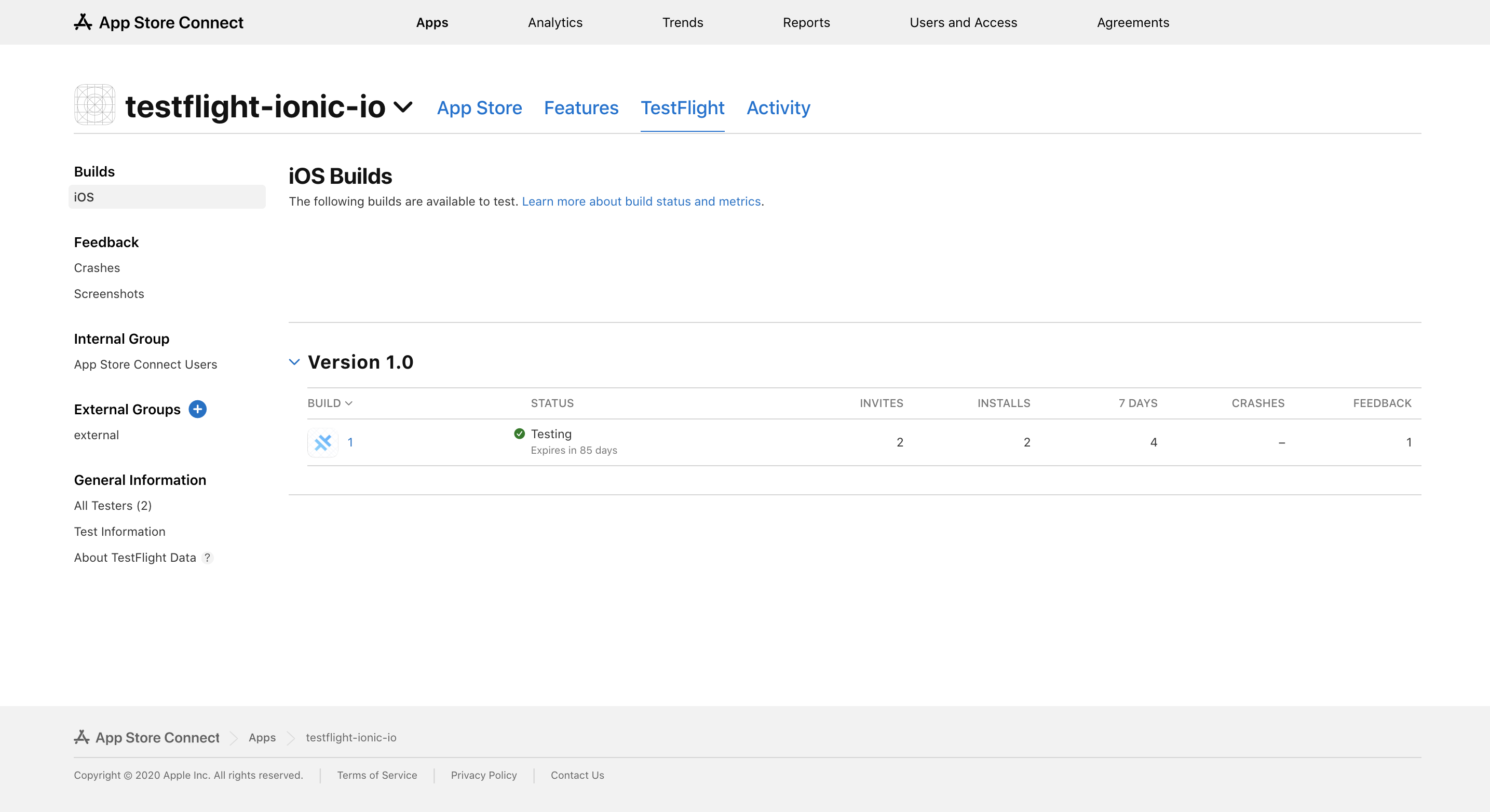 Internal testers should be able to download your application via TestFlight. External users must wait until Apple approves the app for beta-testing. Refer Distribute an app using TestFlight for detailed steps.

To test your android app you can make use of testing tracks in the Google Play Store and enable internal user testing. The Google Play Console also provides best practices for testing your app.

Preparing a build for distribution​

To use testing tracks you need a release build signed with Android security credentials. You can follow the Android Credentials guide to generate a Keystore that can be used to sign your binary.

With these credentials, you can now create a production signing certificate in Appflow Dashboard, similar to one we created in previous chapters.

Deploy to the Google Play Store​

Note: The first upload for a new Android app must be uploaded from the Google Play Store website.

You can follow the guide to adding the Google Play Store as a destination and set one of the internal testing tracks as the destination.

You are now ready to build a production android app on Appflow! Trigger a new android native build just like you did earlier and include the production signing certificate you just created.

You can see deployment logs in the Deploy>deployments tab and select your latest android deployment.

Once the deployment is successful in the Appflow Dashboard, you can now see the same build show up in your Google Play Console account. For this example, we will look at the internal testing track select your app > Internal testing in the sidebar. 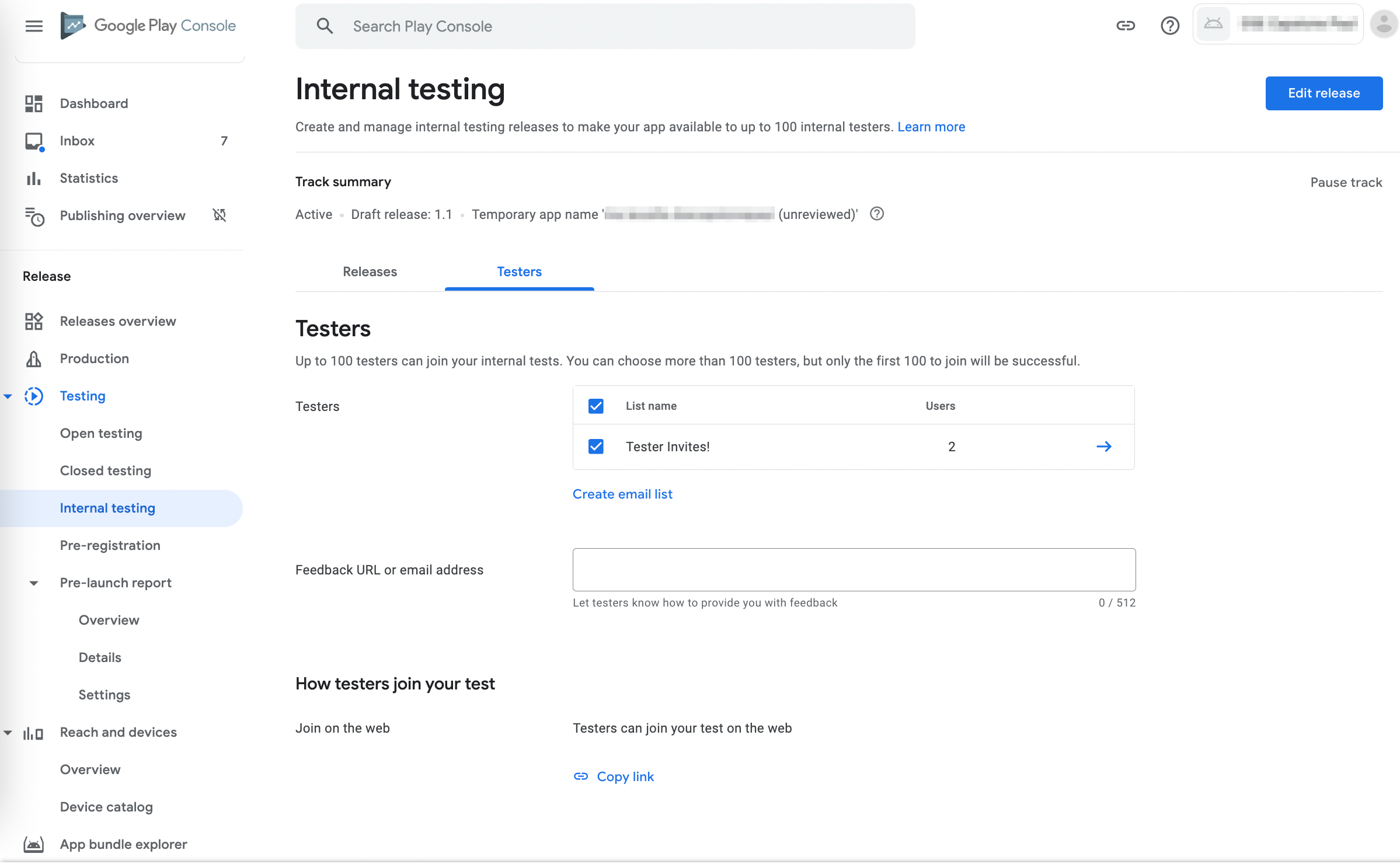 You can now invite internal testers from your Organization or add external testers using their email address. You can also use the provided link to allow testers can join your test on the web.

As an alternative, android debug builds can be directly distributed and installed on a device if needed.

This can be done only on devices with debug mode enabled and can be crucial in the development cycle or for troubleshooting purposes.

However, there are some limitations when testing with an Android debug build with how SSL certificates and Proguard are disabled by default.

When TestFlight or Android Testing track is used in combination with Appflow, Live updates can also be delivered to the testers throughout the testing cycle by deploying Live updates to the corresponding channels.

This can be crucial to evaluate the live updates and overall app experience.

The 3 key components in your testing cycle are:

This now concludes the Testing & QA tutorial. You will have now prepared a build for distribution, deployed to the iOS App Store and/or Google Play Store, and have invited testers for your app.