Ionic Native: Getting Your App Rated and Reviewed 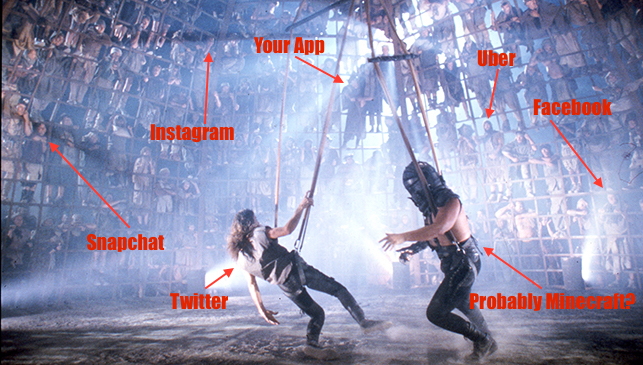 There’s lots of things that can make a mobile app successful–a great user experience, an intuitive and performant UI, not crashing, and actually being useful are just a few crazy ideas that just might work. But at the end of the day, apps first need to be discovered. There’s currently something to the tune of over two million apps in the Apple App Store and two million apps in the Google Play Store, all fighting for your attention in a dystopian, Thunderdome-like scenario. Conceptually it’s something like this:

What I’m trying to say is, there’s a lot of competition, which can make it very hard for a new app to get noticed, let alone downloaded. It’s pretty bleak. So how to triumph and rise to the top of the charts? One of the best ways to break out of the crowd is to get positive ratings and reviews from your users.

It’s useful, simple, and best of all, it doesn’t require a 1980’s special effects hellscape to accomplish.

Why Should I Care About Ratings/Reviews?

Because they make you feel loved, and everyone wants to be loved, yes? Aside from that, here are just a few reasons why you might want positive ratings/reviews, and lots of them:

To start, let’s add the Cordova App Rate plugin to our project with the Ionic CLI:

Next, let’s get a little fancy. We might want the flexibility to be able to call the App Rate plugin to prompt the user from anywhere in our app, without having to configure it multiple times. A good way to do this is to configure a single instance of the plugin in a shared service that can be injected and called from any component in our app.

To create a new service, we can use the handy generate command in the Ionic CLI to create a template for a new provider:

This will create some boilerplate for us in /app/providers/rate-service/rate-service.ts, where we will import the App Rate plugin. We’re also going to import Ionic’s Platform plugin, which we’ll need a little later:

Next, we’ll also create an instance of AppRate and Platform in our constructor:

To make sure the user’s rating is applied to the correct app, we provide the App Rate plugin with our app’s package name for Android and App ID for iOS.

For iOS, this is the numeric App ID that is assigned to your app when you register it with iTunes Connect.

For Android, this is the id attribute of the <widget> tag in our project’s config.xml file:

When you create a new Ionic project using the Ionic CLI, this is set for you. By convention, reverse domain name format is used. You can (and should) feel free to change it to something custom before submitting your app to the App Store or Google Play Store. For iOS, this will act as the bundle identifier for your app.

We provide this to the App Rate plugin in our constructor. Notice that we need to wrap this in Ionic’s platform.ready(). This ensures that Cordova has loaded the plugin before we begin working with it:

To make things more straightforward, I’ve configured this example to point to the Ionic View app, since the example app we’re building isn’t actually available in the App Store or Google Play store.

At this point, there’s a variety of options we can set in the preferences object of this.appRate. Here’s a few of the more useful ones:

So let’s go ahead and take advantage of some of these by changing our constructor to this:

Asking for a Review

Ok, let’s get those reviews flowing by injecting our shared service into a component of our app:

Now that we’re ready to roll, we have two options. We can ask for a rating any time by calling:

Keep in mind that if we do this, the user will be asked to rate the app every time this code runs, every single time they use the app, and they will remember that we did that to them…which isn’t good. So it’s probably best not to do it, unless we’re careful about the application logic that determines when it’s called.

Option two is to let the config we set up handle when to trigger the prompt for us:

Passing false as an argument to the App Rate plugin tells it not to prompt the user until the conditions in our config have been met. In this case, since we set usesUntilPrompt: 2, it won’t ask until promptForRating(false) is called the second time, and only the second time.

So where should we call it? It’s advisable to ask the user to review or rate your app after they’ve done something that leaves them with a positive impression. Here’s a couple hypothetical examples of when it might be a good time to ask:

In case you weren’t following along, I’ve made a sample app that provides solid value by letting you see three pictures of puppies before it prompts you for a review. Now, all we have to do is test the app on a device with Ionic View with the App ID b0c526e8: Or by downloading it from GitHub and deploying to a device with ionic run <ios | android> --device.

May your ratings always be high and your reviews plentiful.