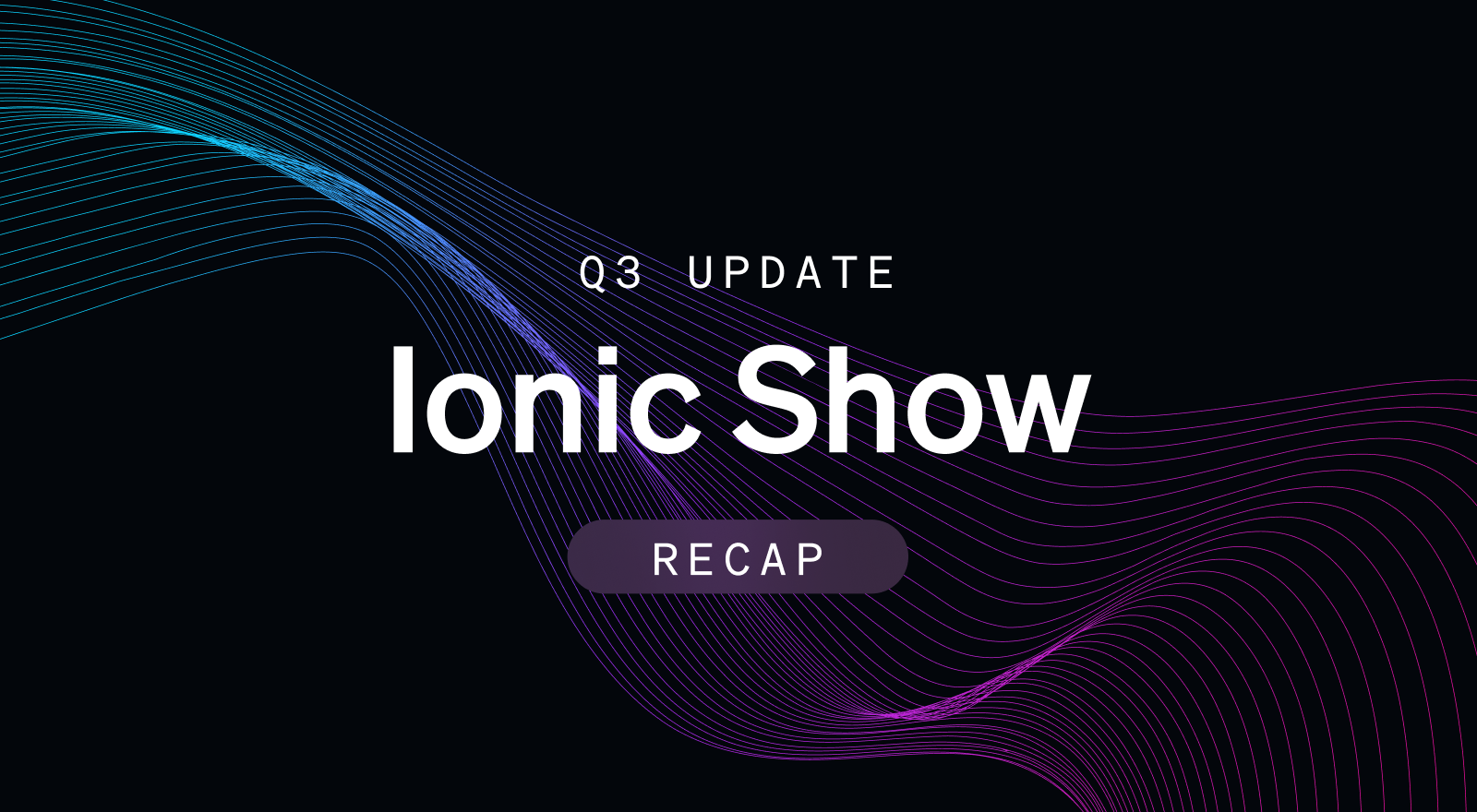 The Q3 Ionic Show had it all… fireworks, live performances, a monkey on a unicycle.

Okay, not quite – but it DID have a ton of exciting updates about all things Ionic! If you weren’t able to catch it live, here’s what you missed:

One of the things we’ve heard consistently from the community is that it’s difficult to modify native iOS/Android projects, which inspired our newest open source project – Trapeze (3:00).

Trapeze is all about making it easy to modify your native projects through a simple configuration file or JavaScript-based API. It also pairs well with Appflow if you’re doing automated builds in the cloud and will be super helpful for plugin authors as well. Ionic CEO Max Lynch gives a full demo at the 4:47 mark.

Framework 6.2 brings with it a slew of improvements and new features (13:15). Datetime Improvements include:

If you have held off on upgrading to Ionic 6 because of datetime, then these new features will be a gamechanger.

We also released and made updates to Component Playground, such as allowing you to interact with components right in your browser, getting framework specific code, and more. Catch a live demo of these updates starting at the 18:45 mark.

In the next part of the show (24:45), we detailed the latest updates for Capacitor, like the release of Capacitor 4, Capacitor-First Plugin development, and more improvements to the Capacitor ecosystem that will make your life easier. We even released a new plugin that will allow your team to seamlessly update from Capacitor v3 to v4. As the platform continues to mature, the team is hard at work creating more plugins, such as Google Maps integration, that have long been requested by the development community.

We’ve also been working with other companies to help them build official Capacitor plugins. Some of these Capacitor-first solutions include HTTP and Cookie plugins that will massively improve the developer experience. We also released some plugins that developers have long been asking for (CORS issues be gone!).

Dallas James, who heads up Web Native development at Ionic, also shed light on the next Capacitor release and ran a live demo at the 31:31 mark.

Christine Perez, Product Marketing Manager for Portals, was joined by Josh Thomas, Product Manager for Portals, at 36:15 mark to discuss Portals. Portals implements a micro frontend architecture to allow multiple teams to build, test, and ship in parallel with hyper-focused embedded web experiences in React Native, Android, iOS, and Capacitor mobile apps. It enables communication between a native shell app and an embedded web experience, and use cases for Portals range from segmenting feature based pages to constructing superapps, where each mini app is a different web application.

At the Q3 update, we announced that Portals is now available for Capacitor! Portals for Capacitor allows teams to take existing Capacitor applications and break them down into multiple web based micro frontends, allowing multiple teams to contribute and publish Live Updates independently.

We also announced Portals for React Native, which will be massively helpful to developers looking to insert web content into React Native applications. See a demo at the 39:38 mark.

Head in the Cloud(s)

We rounded out the Q3 update with Conner Simmons, Ashwini Shukla, and Vivek Mano talking all things Cloud at 43:00. Appflow, Ionic’s mobile DevOps platform, keeps getting better by adding support for other mobile frameworks. Meanwhile, the team has made stability and speed improvements to our build stack infrastructure, which had a great side effect of making iOS builds faster. As part of our efforts to become SOC 2 certified, we’ve removed considerable tech debt and made other enhancements that have made the Appflow dashboard faster and more responsive. Finally, we’re prioritizing many of the user experience requests that have come in over time, such as smoother native build workflows that make it easier to manage signing certificates and other usability flourishes.

We’re also excited to announce a public beta for Appflow for React Native so your team can see how you can import and build your React Native apps in Appflow. We also showed various Appflow features live, such as the newly announced self-hosted live updates at the 51:13 mark. This update will be especially useful to companies whose corporate policies previously prevented live updates.

The show wrapped up with a live Q&A with the developer community at the 54:55 mark, where many were able to get their questions answered live by Ionic experts!

We’ll catch you at the next update when we talk about what we’ve been up to in the later portion of the year, but until then, watch the full recording of the Q3 Ionic show here.